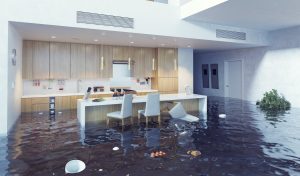 At first thought, one might think that water damage is an annoyance, but that it can’t be THAT bad. While it’s true that cases of water damage are very mild, it is still common for this type of incident to be incredibly destructive to your home. This is because the consequences extend far beyond what one might think they would. For instance, common complications during after a flood include contamination, mold growth, structural damage, electrical issues, and pest infestations. As you can see, a flood can have devastating and far-reaching consequences for your home. Here is what you need to know about these consequences according to our restoration experts at Ally1 Disaster Solutions in St. George.

Contaminated floodwater is a major issue that often accompanies a flood. It adds an entirely new level of danger and damage to an already devastating event. Floodwater with minor to moderate levels of contamination (typically referred to as greywater) poses a fairly substantial health risk for you. Thus, you should leave cleanup of this sort to restoration professionals. Floodwater with severe contamination levels such as raw sewage or harsh chemicals (typically referred to as black water) poses a major health hazard for all involved. Contact or ingestion of this type of floodwater can lead to serious illness or even death so you should not go back into your home after a flood of this sort until it has been thoroughly cleaned by a restoration company.

Mold is one of the main consequences of a flood. The extent of a mold problem after a flood largely depends on the amount of time the flood water remains in the home. A day or two of standing flood water in a home shouldn’t lead to any major mold problems. A week or more, on the other hand, can cause major structural and cosmetic damage.

Water damage is known for compromising the electrical systems within a home. Along with causing you a headache with repairing your electrical systems, this poses a major health hazard. This happens because water conducts electricity so well. Thus, contact with standing water can lead to electrocution if there are lingering electrical problems from the flood.

One final major consequence of water damage is pest infestations. Undesirable critters like cockroaches, ants, termites, earwigs, and rats are all attracted to the moist environment of a flooded home. Along with being just plain gross, many of these critters are carriers of disease and can structurally damage your home. The best way to avoid this hazard is to remove the floodwater from your home as fast as you can so these pests have less time to find your home and take up residence there.

Don’t let water damage get you down! While its effects can be very destructive, you can mitigate many of these effects by acting quickly to remove the water and repair the damage. Give us a call at Ally1 Disaster Solutions in St. George to help you overcome these hazards if your home is ever flooded.